SOAP Fest is an independent project initiated by members of The Sandbox Artists Collective, a membership based collective of working theatre professionals, formed as a place for mid-career artists to explore their craft in the company of their peers. It was originally created in the fall of 2008 by Freehold's Theatre Lab in an effort to continue to push for a renaissance of new, courageous and experimental work in our artistic community.

What is SOAP Fest?

SOAP Fest stands for Sandbox One-Act Play Festival.  It's a festival of brand new one-act plays, written by members of The Sandbox Artists Collective, and performed under the Actors' Equity Members' Project Code.  The inspiration comes from Ensemble Studio Theatre’s Marathon of One-Act Plays in New York, where several Sandboxers including myself are also members.  Leslie Law was having great success with Sandbox Radio Live! (which just transferred to ACT), so the timing felt right.  Thankfully fellow Sandboxers Liza Comtois and Gin Hammond graciously agreed to help steer the ship.  SOAP Fest premiered in June 2013 for three nights only to full houses, with a company of 40 actors, directors, playwrights, designers, and production staff, most of whom came from The Sandbox. This year we’ll be at West of Lenin in Fremont, June 4-June 8. 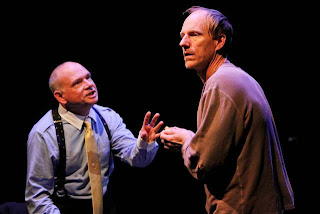 You have had an amazing line-up of playwrights for last year's event - including Elizabeth Heffron, Scot Augustson, Emily Conbere, and Paul Mullin.  What have you heard from participants (actors/playwrights) regarding why they are eager to participate in SOAP Fest? 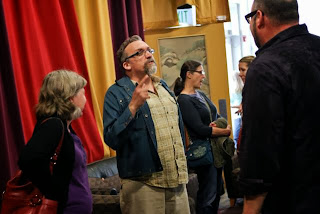 Seriously, those were some exciting playwrights.  We couldn’t believe our good fortune for the very first year!  Hopefully what draws such talented writers is that SOAP Fest is first and foremost a playwright's festival.  The goal is to provide a workshop-like atmosphere where writers can continue to develop their plays, even during the rehearsal process.  Thankfully the directors, actors, and designers are totally on board for the ride.  We also do our best to get the word out about SOAP Fest, so people who participate can be confident that it's going to be seen. (photo above: With director Julie Beckman and playwright Scot Augustson. Photo by John Ulman.)

What have you heard from past SOAP Fest attendees?

What was exciting was that people left the theater talking.  They wanted to discuss what they experienced -- the surprises involved in Scot Augustson's Milwaukee, the heartbreaking moments in Elizabeth Heffron's …dispose of me…, the controversial subject matter in Paul Mullin's Openly We Carry, or the incredible transformation that takes place in Emily Conbere's Knocking Bird.  The audience also seemed to really appreciate watching something intimate unfold with terrific acting in a beautifully understated setting.  And because they’re one-acts, they’re complete stories where, in the words of playwright (and current SOAP Fest Literary Manager) Conbere, “the blow of the climax comes quicker and more to the punch.”  I think people also enjoyed seeing the premiere of brand new work.

What are you excited for regarding the upcoming SOAP Fest in June, 2014?

Our inaugural lineup was really thrilling, and we can’t wait to see who will be featured in SOAP Fest 2014.  One of the interesting aspects of SOAP Fest is that the scripts are submitted anonymously.  The plays that are chosen are selected exclusively because they’re great stories.  Incidentally, last year’s playwrights are asked to sit out from submitting the following year, so 2014 is wide open for a whole new lineup.  Even with that guideline, we got over 50% more submissions!  When it comes time to discuss the plays, it’s going to be intense.  But I can already guarantee that SOAP Fest 2014 is going to be good.

For more information on SOAP Fest, go to http://www.soapfest.org
Posted by Freehold Theatre at 9:48 AM