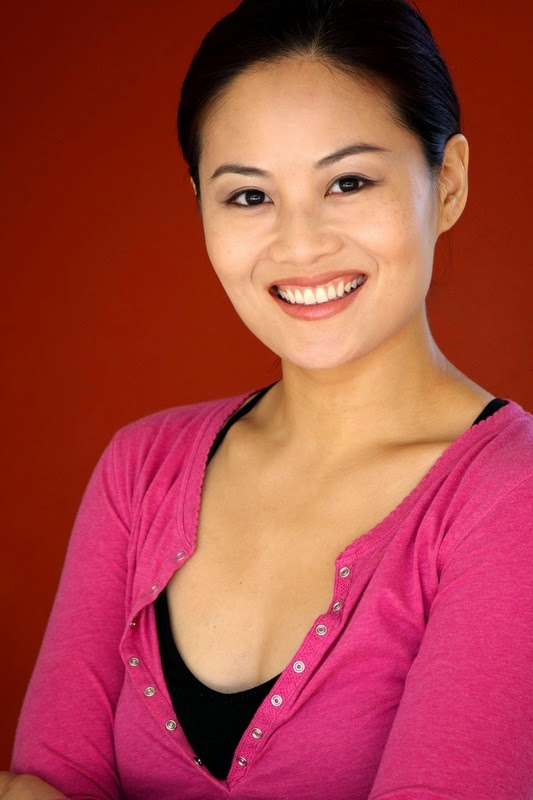 Happy Monday, friends of Freehold! Have you ever wondered what former Ensemble Training Intensive (ETI) students have gone on to accomplish? Over the weekend the multitalented actress, model, producer (and ETI alum!) Kiki Yeung was kind enough to answer some questions for us about her life since ETI.

FREEHOLD: What first made you interested in acting and theatre?

Kiki Yeung: Since I was a kid, I wanted to be an actor. When I lived in Hong Kong, my dream was to become a pop singer, then my family immigrated to Bothell, WA when I was twelve. Growing up, my dad played a lot of Hollywood movies such as Die Hard, Jaws, Star Wars and Indiana Jones at home. I wanted to be like Julia Roberts after watching Pretty Woman. When I went to UW, I wanted to major in film acting, but there was only theater major. Theater and monologues were such foreign concepts to me. Luckily, there was no audition necessary to enter the Drama program, and I'm so glad I majored in Drama and learned the production side of things.

Since graduating from ETI, what are some of the projects you've been involved with?

I continued to develop my one woman show "Second Chances For Grace" from the ETI solo class. I met an amazing actress and teacher, DeAnna Driscoll in San Diego. She directed the show and it won an award at the San Diego Fringe Festival in 2013. It was a challenging and exciting process to play eight characters based on my life. I am a producer and actress at Titan Sky Entertainment. We are in development for GodMachine, a sci-fi film featuring some alums from TV series Star Trek and Earth Final Conflict. Our latest feature Star Leaf is premiering at Seattle Northwest and making an appearance at Hempfest and Hempapalooza in June 2015. I worked in Hong Kong recently and traveled to London for filming with some of my favorite actors from Hong Kong. I got to work with Thailand superstar Tony Jaa on a big budget action film and booked a feature role in another feature film.

You've been involved in several different types of projects (acting, modeling, producing), often simultaneously--how do you manage it? And how do you feel that your different areas of work influence each other?

I never thought about how I manage it. Good question. I pray and go with my instincts on projects I feel passionate about and work with people who inspire me and complete their projects. Timing is very important. I learned to be more patient while waiting for things to fall into place. I get to act in the film or play I produce, and modeling just comes when I get a call from my agents. Everything is interconnected and the experience contribute to my growth as a human being and an artist.

How has your participation in ETI impacted the work you are doing currently?

ETI changed my life. I'm still absorbing things I learned from voice and movement. I still practice the warm ups and vocal progression very often. I swear by them. The yoga practice helped me tremendously to tune into my body and mind. I learned to be open and have a child's mind at any stage of production. I definitely am confident about my process and am constantly refining it as time goes by. Suddenly, something I learned from ETI clicks. Being part of an ensemble taught me how to communicate with and manage people when I am acting and producing. 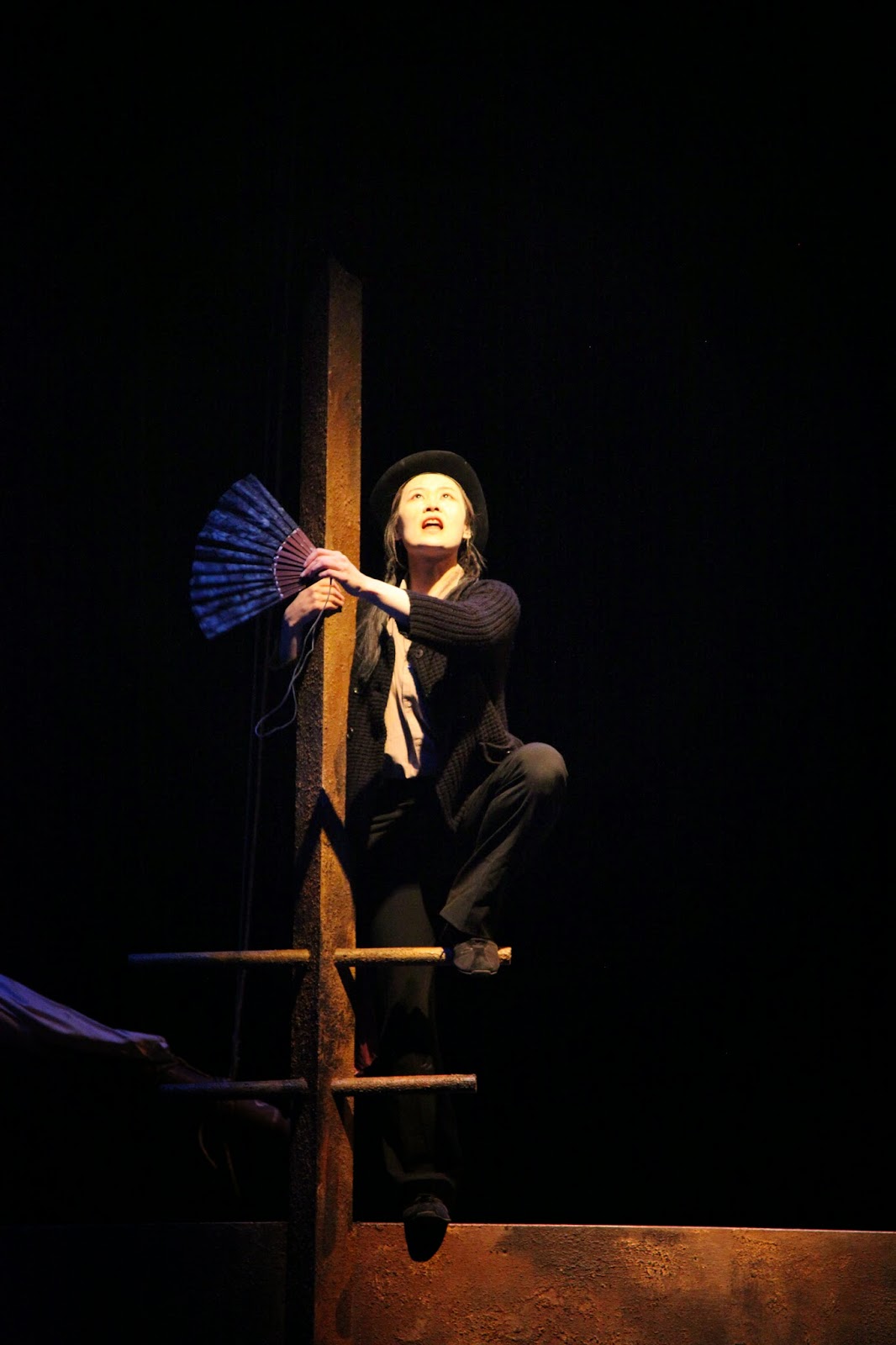 How has being an actor of color affected your career?

It's been a roller coaster ride. As a woman of color, an immigrant and an actress, I have to create opportunities for my peers and myself. In San Diego, colorblind casting is almost non-existent. It gets frustrating playing the same characters that have a few lines. I'm good at it but it no longer challenges me anymore. I feel I have to be 200% better, faster, prettier, more well spoken, useful and prepared as an actor of color. I cannot just be an actor, I have to learn how to produce, writer, direct, edit and market my own projects. All this is good because it made me a stronger more multifaceted actor. I learned to accept my strengths and weaknesses.

Can you tell us a little bit about the organization you founded, the San Diego Asian Artists Ensemble (SDAAE)?

It was out of frustration and passion to connect with other Asian artists in San Diego and create opportunities to share our talents with the community. We are rehearsing for our inaugural production San DiAsians! The show is written by the cast and is a dynamic presentation of sketch comedy and monologues. The monologue brings each actor's story to life with a splash of music, dance, martial art and some soy sauce on the side. We are launching an Indiegogo campaign to raise funds for the production. The cast, writers and musicians have all pulled together to create a promo trailer. I'm impressed by the amount of talent in San Diego and feel so blessed I get to be a part of this. Like us on Facebook! www.facebook.com/sdasianartistsensemble

What were some of your favorite or memorable moments from your time during ETI?

Voice class when my teacher, Kimberly pressed the spot on my tummy and I started crying as if a door has unlocked. She told me it's ok. You are enough. I never felt enough for myself, my parents, my acting. That moment woke me up. Being in George's class doing crazy movement and handstands. Just playing and trying new things. Testing my limits. Being in voice class and seeing my classmates open up and be vulnerable. Making friends that I still contact now. Getting suffocated with a pillow by Lance McQueen for our Othello scene. Running after Tony and getting dragged by his leg as Helena in Midsummer Night's Dream. Playing Fate #3 in Pericles. I loved the process and being on the stage, anchoring the fake boat. Imagining the waves coming in, laughing and smiling to myself, thinking how much fun I was having and the audience can feel that energy. Breakdancing with a stick in Pericles. Spraining my right ankle then my left ankle during stage combat and rehearsal. Falling back on my head with a mild concussion during rehearsal. Graduation day, the look in my friends' eyes, the hugs we shared and how proud Robin and the teachers were of us. The look in Robin's eyes when she's saying something that means something to her...she tears up.

What advice do you have for those considering applying for ETI?

Just go for it. I didn't think I would get in let alone receive a scholarship since I applied six or seven years post graduation from UW and was rejected. Timing and not giving up is key. Get a coach and work on some new material. Be prepared to play and collaborate in a group setting. Breathe, stay in the moment and connect with the group during the audition. Just have fun! Not everything or everyone will be fun, but those things will test your character and stamina, and that's what a truly great actor is made of.

Interested in learning more about the ETI program? We've got an info session tonight at Freehold at 6pm. Applications for ETI's 2015-2016 season are due on April 20th.
Posted by Freehold at 11:13 AM